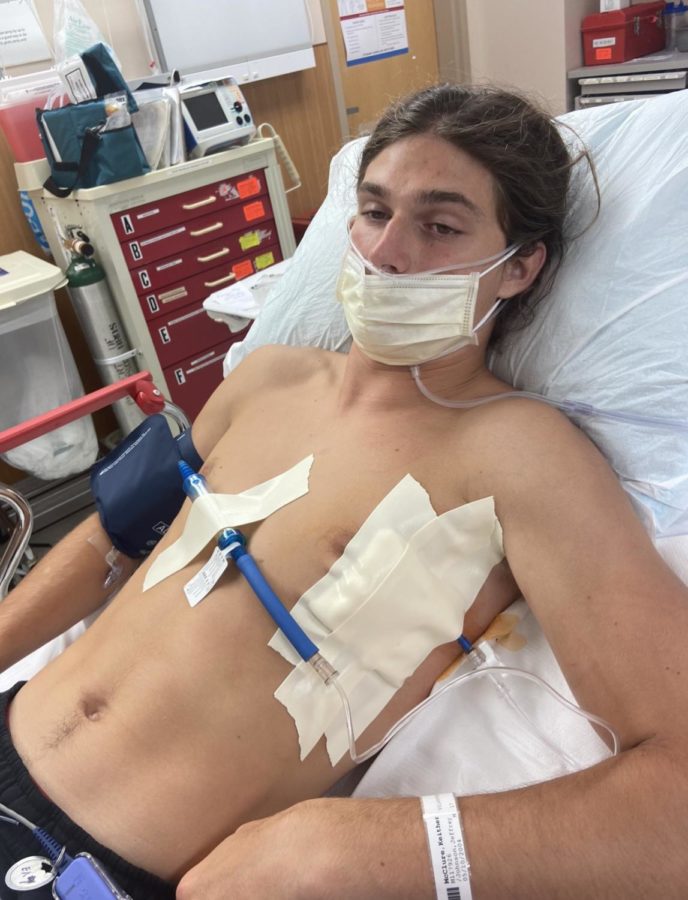 Friday Sept. 3 senior Keither McClure was taken to the Coffeyville Regional Medical Center due to an injury he sustained at the game. He was immediately rushed in and taken care of by the staff.

You hear the sounds of a normal Friday night football game until cheers turn to silence.

Senior Keither McClure never saw what was coming at the Coffeyville game that night. Silence fell over the crowd when Keither was knocked to the ground. Senior teammate Peyton Lewis helped McClure off the field

“I knew Keither would want me to go play ball and perform for him so that’s what I did,” Lewis said.

Assistant football coach Dawson Elliot picked Keither up with joy, but when he set him down he crumbled to the ground.

“I prayed to myself, but I knew Keither was hurt,” Keither’s mom Amy said. “He is the youngest of four, so he can endure pain, but I stayed put in the bleachers until athletic trainer Danny Smiley started looking for us.”

All Keither remembers was getting hit and taken off the field by a teammate. He rode in an ambulance to the Coffeyville hospital. Amy was very nervous taking Keither to the Coffeyville Regional Medical Center, but was pleasantly surprised by how kind, fast and how quick he was discharged from the hospital. When there, he was diagnosed with three broken ribs, a collapsed lung and his spleen was bleeding inside itself. Keither was not shocked he had to go into surgery, but was shocked that he was hurt as bad as he was.

“I can’t say enough good things about the staff that cared for Keither,” Amy said. “They always explained what they were doing and why.”

Keither is recovering, taking it slow and getting a lot of rest, along with the restriction of not lifting anything to make sure his spleen does not rip. He is bummed that he can not be out on the field to help his brothers win games.

“It really sucks that I got hurt in my first game of senior year,” Keither said. “Just now starting in a varsity game and now I’m not going to be able to play really sucks.”