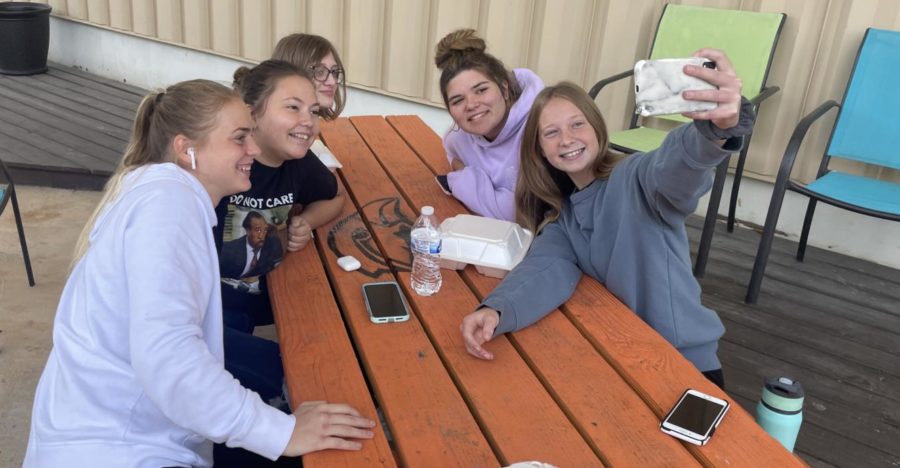 While eating outside for lunch, seniors Chloe Wells, Kirsten Woodard, Grace Logan, Haley Smith and Jamie Linder take a selfie. Students use photos as a way to capture their high school experience.

Cameras click through the hallways, in the classroom, at sports practice, even as the buzzer sounds at the football game. What is the first thing to do in these situations? Pull out your phone and capture the moment, of course.

Selfie culture is sabotaging the world we live in. How often we pull out a phone to take a picture or video affects everything from someone’s self confidence to their mental health.

“When I think of selfie culture, it’s people taking pictures and how they take them,” junior Alli Eastridge said. “While I’m in school, they’re mostly things I think are funny, but not everybody else thinks they’re funny. Like taking a picture of what’s behind you as a selfie.”

However, not everyone follows this same opinion. Freshman Travis Casteel understands the ways cell phones can bring out the selfishness in people.

“I think sadness,” Casteel said. “What came up in my head was those videos you see when there’s a little grandson walking and then falling over on their head and grandma, mom, dad are recording it and not helping them at all.”

People in today’s world are extremely focused on their virtual lives. Managing editor Rachel Ehmke in the article “What selfies are doing to self-esteem” published in Child Mind Institute knows the effects of overdoing social media.

“The average woman between 16 and 25 years old spends over five hours a week taking selfies,” Ehmke said. “While social media might not be causing a mental health disorder, it can pull some kids closer into a diagnosable range if they are already struggling.”

Students use their phones regularly during their everyday lives.

“I post at least 12 pictures on my [Snapchat] story every day, plus the ones I send to other people,” Eastridge said. “I don’t take out my phone in classes, but then I pull it out after and do the same thing.”

Eastridge believes phones can be a great tool to document memories and adventures to make people smile.

“I like taking pictures of myself so I can be like ‘Wow, I had such a great day that day,’” Eastridge said. “Even through experiences, you’re not going to remember everything, so if you take a picture then you can look back at it and say ‘Wow, I did that, I remember, that was really fun.”

Phones can be considered a great tool at times, specifically in a classroom setting in connection to an assignment.

“I like to have videos of other people, whatever they’re doing or if I have homework and don’t want to take my textbook, I’ll take pictures of my textbook,” freshman Harley Dehner said. “I don’t like taking pictures of myself.”

Overall, the use of cell phones is a personal decision, not one person has the same purpose with their devices.

“The occasional photo is fine, of course, but make a point of prioritizing being in the moment, too,” Ehmke said.