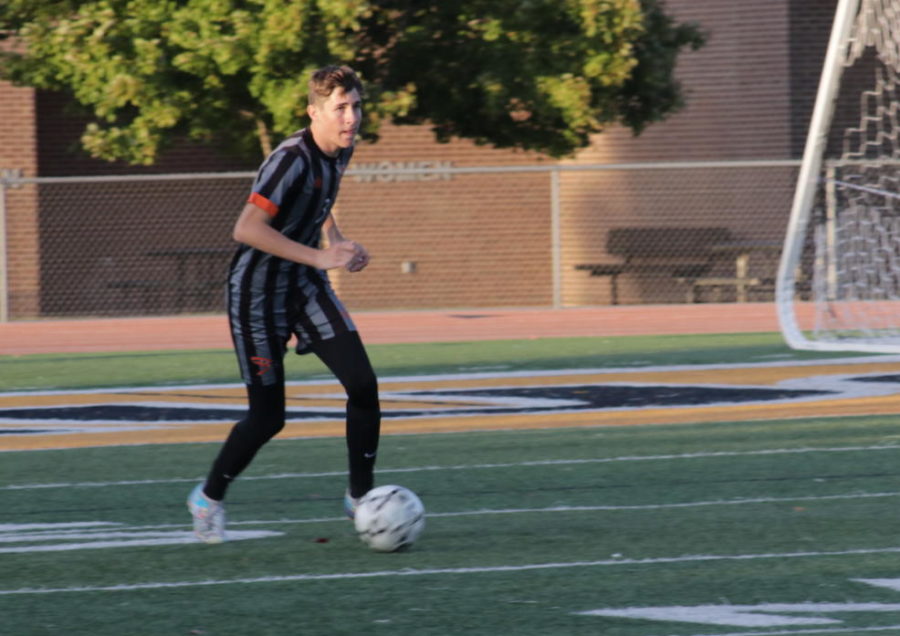 Sophomore Bradin Dennett looks down the field as he dribbles the ball. The Orioles finished the regular season with a 14-2 record.

With regionals right around the corner and after talking with the seniors on the team, including state-ranked Payton Ball and Kaden Kearney, varsity soccer coach Dusty Buell decided to give seniors a break and not to play them in the game against Trinity Academy.

Even though the decisions resulted in an 0-8 loss, which was only the second loss in a 14-2 season, Buell made the decision hoping to benefit the team as they headed into regionals with the number one seed.

Not all players liked the decision.

“I really wish we played our seniors because it would have been a lot closer, and we probably would have scored more having Payton and Kaden on our offensive side,” freshman Dalton Pankratz said.

“It was a good decision by Dusty because we’re going into regionals from that game; we didn’t have anything to gain from it,” Scott said. “We were already 14 and one on the season, and we would rather have our seniors healthy for regionals than get hurt in the game that didn’t even matter towards our seating.”

Ball saw the decision as something that needed to happen since players like senior Connor Inlow recently came back from injuries.

“I didn’t want anybody getting hurt because Connor just got injured about a week ago so it’s probably better this way,” Ball said.

If the seniors had played, Kearney believed the game would have been a dogfight.

“I think it would have been a really good game, and it would have come down to who wanted it more, and I always think my team wants more,” Kearney said.

Without the seniors on the field, the score didn’t show what the team was capable of.

“The score wouldn’t have been the same, it would have been a way closer game,” Ball said. “If we do meet them again, we can definitely beat them as long as we play our game.”

The Orioles play at home tonight in the first round of regionals against Circle at 6 p.m.