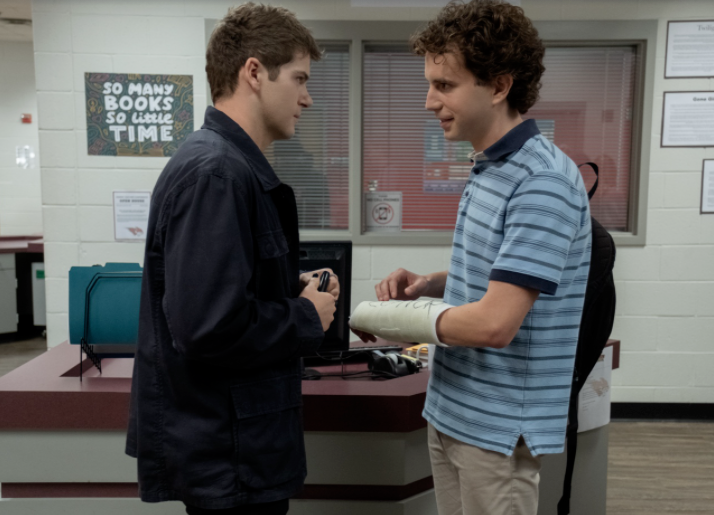 After Connor (Colton Ryan) yelled at Evan (Ben Platt) in the hallway, they cross paths again in the library. Connor apologizes to Evan and signs his cast to make Evan feel good and says “Now we can pretend we both have friends.” ©Universal Pictures

The hit Broadway musical to a movie, ‘Dear Evan Hansen’, opened on theater screens everywhere  Sept. 24. The hit Broadway musical is emotionally powerful and shines a light on teen loneliness and suicide as well as the ways social media can positively and negatively affect people. The producers’ decision to make the stage show into a movie to reach a wider audience was a good one in my eyes.

In 2017, the musical won six Tony Awards, including Best Musical and Best Actor In a Leading Role in a musical awarded to actor and singer Ben Platt. He remains excellent as socially anxious Evan, both on-screen and on stage, and the show’s outstanding songs are as dynamic as ever.

American playwright Steve Levenson wrote the original musical, but director Stephen Chbosky took on the movie adaptation. Chbosky is known for directing ‘Wonder’ and ‘The Perks of Being a Wallflower’. The job of the movie musical director is to make breaking out in song seem natural. Some directors do it well; however, Chbosky seemed to struggle.

Whenever a character broke into song, dramatic lighting helped to create a heightened environment that serves to sell the musical number. On the other hand, when Evan sang during an emotionally delicate moment — in a bedroom or in an ordinarily lit dining room — it felt a little awkward.

Musical numbers work best cinematically when the setting evolves around Evan or when Chbosky jumps from character to character when more than one is singing, such as with the astounding song ‘Requiem’. Approaches such as these pull a person out of the strict reality and allow them to become fully immersed in the song.

Chbosky started the movie’s opening number with the unforgettable song ‘Waving Through a Window’, which has a catchy tune that will stick with you for a few days. The movie began with Evan in his room with his prescription medication, and concludes with him at high school with other students surrounding him and anxiety flowing through him.

Evan saw a therapist at the request of his hard-working, single mother, Heidi. He was given the assignment to write optimistic letters to himself. The letters begin with “Dear Evan Hansen, today is going to be a great day” but they do not all turn out to be as encouraging as planned.

Over the course of ‘Dear Evan Hansen’, a school bully named Connor takes Evan’s encouraging notes just before he commits suicide. His parents believed Evan’s letter was their son’s suicide note. What may have begun as a well-intentioned lie leads to greater complications. While Evan enjoyed his life like never before, guilt from not telling the truth weighs him down.

Although Platt is an amazing Evan, he did come off as too old to play the role of a high school student. Nonetheless, he portrayed Evan’s emotions of how exhausting it is to be him perfectly.

If you can get past the film’s few stumbles, so much works in the screen version. Just as it is on stage, mid-story number ‘You Will Be Found’, surrounding a moment when Evan goes viral, is as moving as ever. Listening to the song closing out the movie, you would be glad to have gotten to know Evan.