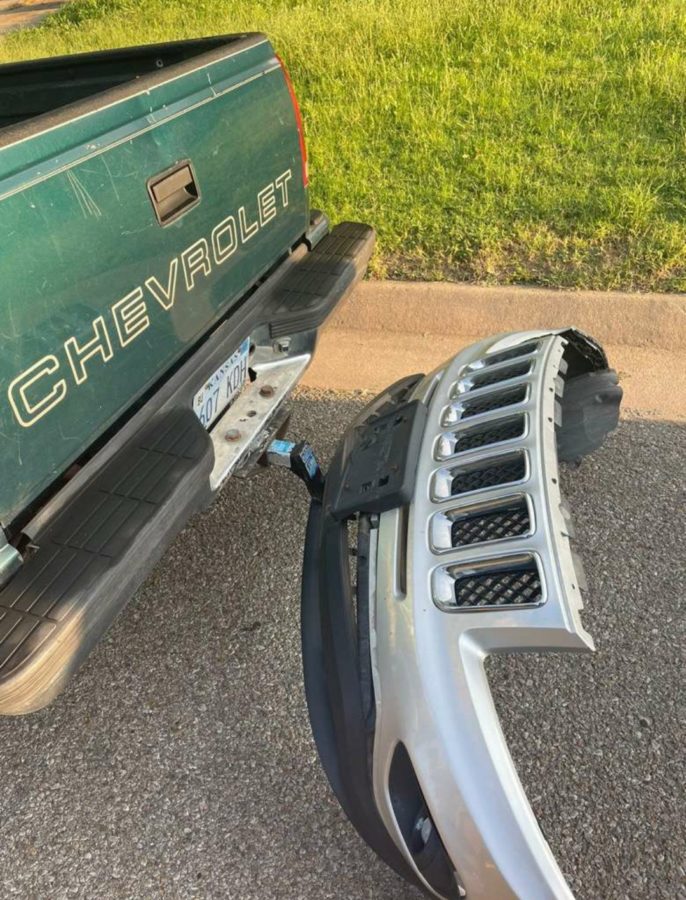 Juniors Libbi Skaer and Samantha Pressnell got into a car accident on 31 August. The car accident took place in front of the school where the girl pulled over to observe the damage.

After school, Bob was in a rush to go somewhere, and he quickly hopped into his car and put it into reverse. He did not pay attention and hit the car behind him as he was backing out.

“This year, there have been four in the school parking lot,” School Resource Officer Mat Meckel said.

People get into car accidents for multiple reasons.

People have been involved in car accidents because they are not paying attention and are in a rush.

“You need to slow down to allow you enough time to get to school or a school activity on time or be at school,” Meckel said. “Don’t be distracted texting, talking, sending any type of messages over the phone. It’s better to go slow because it can be expensive for yourself and the person that you’re  hitting.”

Students are spending a lot of time on their phones.

“People get into car accidents because they are not paying attention and being on their phones,” Skaer said.

On August 31, juniors Samantha Pressnell and Skaer were involved in a car accident before school.

“I looked into my review mirror, and I saw who it was, and then we pulled off to the side of the road, and I knew who it was so it wasn’t a big deal. It wasn’t a bad wreck,” Pressnell said.

Some students are moving out of the way for other students to get by.

“I told the person in front of me to pull over to the side street, and I called my dad, and she called her dad, and then we worked things out,” Skaer said.

Sometimes students have been hitting a car and then leaving the scene and not telling anyone.

“If you hit someone’s car, tell someone because you wouldn’t want your car to be hit and the person just drives off and have your car damaged,” Meckel said. “Some people think it is just a bent bumper or this or that, but it’s someone’s property that they have spent their money on and they want it looking nice. So if you hit a car and you drive a car, that is a criminal act, and there are some students that could be charged for that.”

Any time someone is involved in a car accident Meckel is normally the one who goes out and helps.

“Generally, either myself or one of the principles are notified, Meckel said.

ultimately it’s my responsibility to investigate what happened, and we do that by looking at the security cameras, getting peoples’ witnesses statements and looking at evidence left at the scene,” Meckel said.