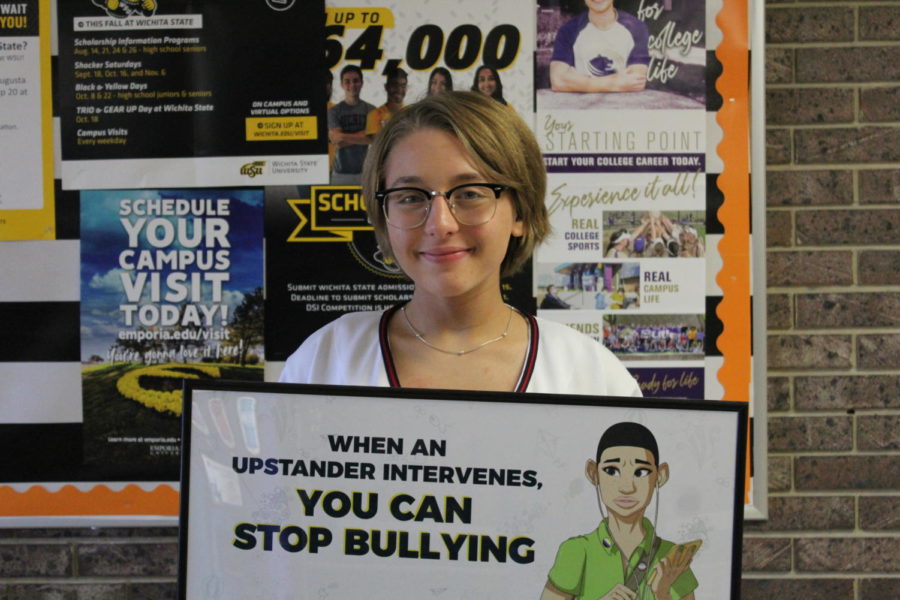 Sophomore Emma Neuschafer showcases the bullying poster found in the counselor’s office. This supports the bullying awareness cause that the student body in AHS has currently been taught since the first early stages of education.

Change takes a leap of faith

From being forced to dress as an elf for freshman orientation in 1977 to be accepted, to being shown awareness presentations and encouraging the acceptance of all. The objective of teaching bullying and sexual awareness to students in high school has changed drastically.

“1974 to 1980 was when I was in middle school and high school, I graduated in 1980, well these issues were just not addressed at all period. Counselors never addressed it, principals never addressed it,” English teacher Tim Laner said. “In fact, my freshman year we had initiation, and the seniors initiated us as freshmen. I just remember I had to dress as an elf for Christmas and walk around the school giving people candy.”

“We always had bullying slideshows, and pep rallies,” Sophomore Emma Neuschafer “Bullying has been brought up to me for years,”

When it comes to comparing how two generations handle this repetitive problem, different reactions follow problems when light has been shed on them. Past authority reactions would not pass in today’s world.

“I still remember one of the P.E. teachers telling us, ‘oh, you just need to suck it up,’ you know, ‘quit being such a baby’,”  Laner said

“Comments people might make now are probably to be careful about what you say and who you tell,” Neuschafer said.

Although in today’s society it is normal and required to be taught to children of all ages, that does not account for the backlash encountered when speaking up about issues.

“I would say there’s a lot of making fun and making jokes about bullying and sexual harassment and not taking it seriously,” Neuschafer said. “It’s not taken as seriously because there are a lot of polarized opinions. Very one side or the other, one side is joking about it, and the other side are like this is a serious issue that needs to be addressed and figured out.”