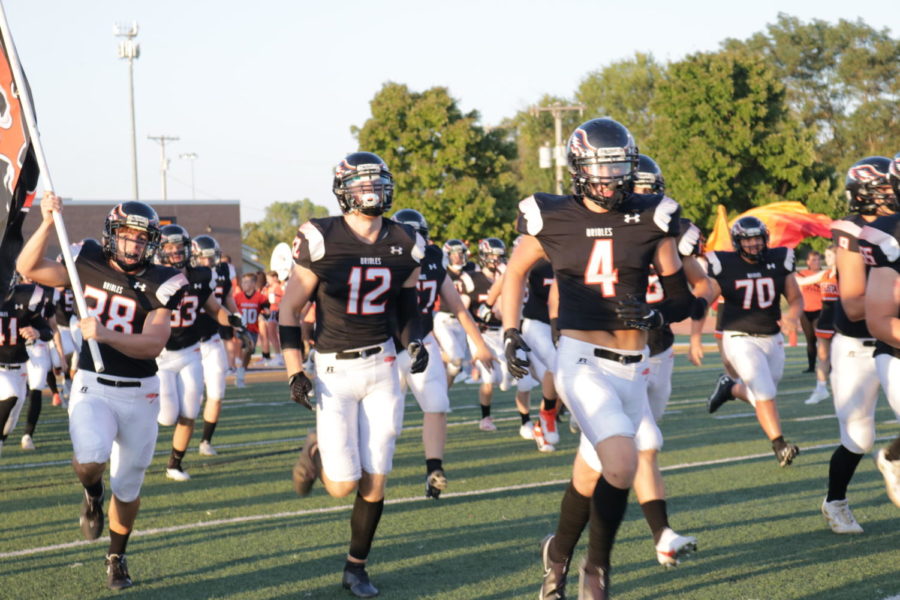 The football team runs onto the field in their new jerseys. The team was surprised with these black jerseys a couple of hours before kick-off, adding onto the orange and white jerseys they got earlier in the season.

Touchdowns, tackles and victories take over the football team as they start the season off with wins in the first two games of the season. Along with being on a two game winning streak for the 2021 season, the team received new jerseys. Head coach Jason Filbeck felt it was time to get new jerseys after seven years.

Senior Caleb Hussleman prefers the new jerseys over the old.

“These new ones are basically an entirely different fit. It looks tight on me when I wear it without pads, but I can still put giant pads on, and they still fit fine,” Hussleman said. “It’s got a new font on the numbers and decals on the shoulders. I prefer the new jerseys, just because they’re tight, which does help with grip.”

While Hussleman believes the jerseys affect how he plays, junior Austin Duncan does not.

“It’s hard to move around sometimes because they are so tight, but personally, I don’t find it interfering with what I do,” Duncan said.

Duncan does not feel affected by the switch, however, sophomore Gavin Kiser is not in favor.

“Hopefully we can get some new jerseys and new pants for next year or the years after that,” Kiser said.

While Kiser hopes for a switch soon, assistant football coach Dawson Elliott believes this was the right decision for the team.

“The decision was made a couple of years ago that we are going to be a BSN sponsored school and Under Armour was the choice that all of us coaches made, not just football but basketball, baseball, whatever,” Elliot said. “So we went with Under Armour hoping for a little bit higher quality stuff, then when we had with Russell, and so hopefully they’ll be more durable.”