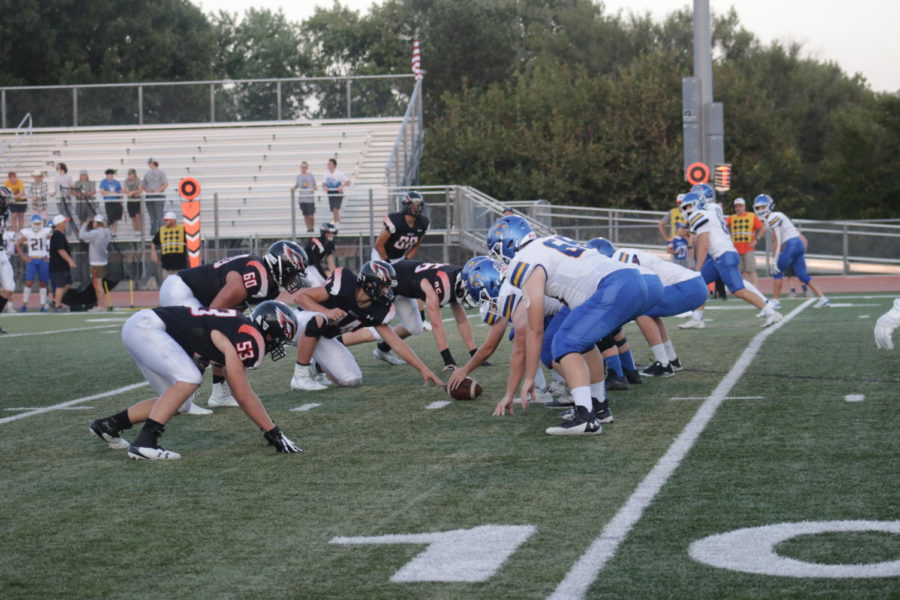 The players are all lined up ready for the quarterback to snap the ball at the home football game between Augusta and Circle. The game ended with Circle winning with a score of 42 – 35.

Fans cheering, orange and black jerseys mixed with blue and yellow, a football being thrown down the field; it is a football game between rivals.

“Augusta and Circle have been rivals for years and years,” senior Preston Bratton said. “The main reason for the rivalry is because of the fact that they are a neighboring town.”

Some students know about the rivalry between Augusta and Circle, but they do not know when the rivalry started.

“All I know is that Augusta has been rivals with Circle since years before I have been here,” junior Kaden McDaniel said.

The rivalry between Augusta and Circle has been going on for a long time, but some students only have certain events between the two schools that stand out to them.

“I really think it started getting more escalated when one of our flag people planted our flag in the middle of Circle’s field after we destroyed them,” Bratton said.

Some of the events could have been long ago, or even recently.

“I know that recently Circle’s barstool on Twitter has talked a lot of trash on us, so we take that to heart and take it as more motivation,” McDaniel said.

While some students care about what is being said on Twitter, some students either do not have social media or do not find it a big deal.

“I know that recently there’s been some stuff on Twitter, but that’s about it,” junior Thomas Johnson said. “I stay off of social media and I don’t say anything.”

However, this rivalry is not just about schools talking back and forth, this rivalry could fuel some players to want to win their future games against Circle.

“I personally love rivalries and the competition that it holds,” McDaniel said. “Circle hasn’t beaten us in 9 years, and I want it to continue.”

“I think the rivalry definitely does fuel the fans, but for the team, whether there is a rivalry or not, we are gonna play hard regardless of who it is we’re playing,” Bratton said.