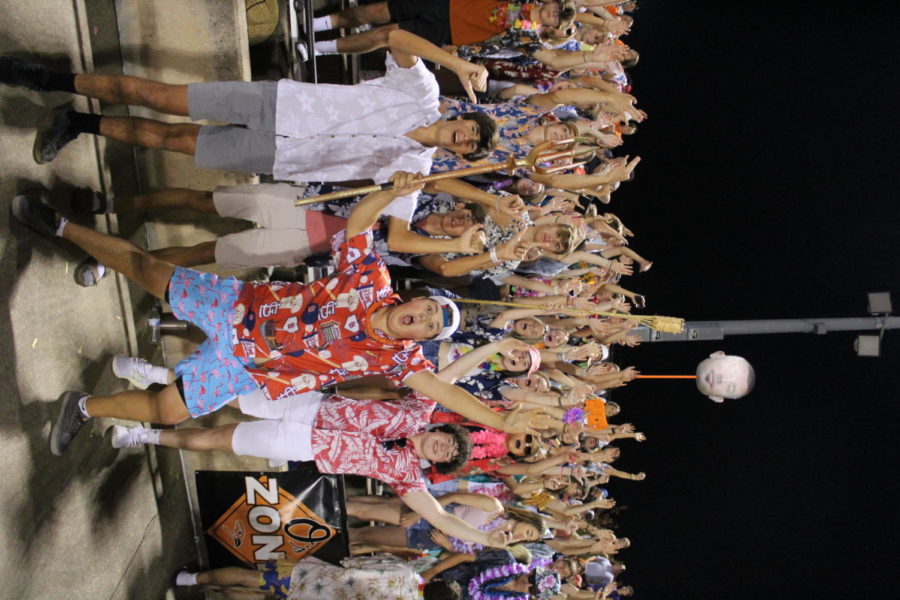 The O’s Zone cheer on the football team at the rivalry game against Circle. The seniors stood in the front jumping around to get the underclassmen involved.

Sitting in the crowd of Hillier Stadium, parents of athletes look over to see a large group of students all dressed up chanting “We can’t hear you”, “D-D-D Defense” and so much more.

After not having a normal junior year, the senior class knew they needed to change the atmosphere of the student section. In order to make the change everyone wanted, senior Kallie Smith decided to take charge of the O’s Zone, which is the school’s student section.

“Last year, we didn’t get to have any student sections, and even when we did, you had to have a voucher, so I really wanted to bring that back since student sections are one of the places where you make the most memories,” Smith said.

The seniors missed the excitement from their previous years and they felt they could lead the way to bring it back for this year’s underclassmen.

“My freshman and sophomore years were really fun, especially with the upperclassmen leading it,” senior Grace Kasilima said, “but, after our COVID year, our student section went downhill badly.”

The students also decided it was necessary to support everyone, not just varsity football on Friday nights.

“We have been at almost every single game and event including cross country, JV football and volleyball and gotten hype at each event,” senior Chance Kohls said.

Senior Kaden Kearney believes the change shows how much the senior class can affect the student body.

“It really shows who we are as a class, always being there to support each other, and we are all trying to build a legacy before we graduate,” Kearney said.

The major goal the seniors want to achieve is getting more students involved, including underclassmen.

“We’re trying to do more games and things that keep students involved,” senior Kyra Carrell said. “We are trying to grow the student section and make kids know that we want them there, and that it will be a fun experience.”

Whenever the students include activities more than just yelling, “Let’s Go, Orioles” they believe it helps get the rest of the students hyped up.

“I’m trying to have as much fun with things as possible, from playing music during timeouts and quarters to chanting and getting our students riled up and excited for the game,” Smith said.

Kohls’ enjoys all the excitement from the students and loves using his own special prop.

“My favorite part is getting everyone hype by hoisting the trident, because holding it up for everyone makes it fun,” Kohls said.

Members of the senior class have led all the support, games and music, which they are having the most fun doing.

“My favorite part is definitely the energy we all give our players, and also that I get to lead it after watching the leaders for three years,” Kearney said.

The seniors’ mindset is based on one phrase, which they want to keep going for the rest of the year.

“Our favorite phrase this year is E.L.E, everyone loves everyone, because all we want to do is grow closer and give everyone the same support all year long,” Kohls said.