Phones are a beneficial tool for students 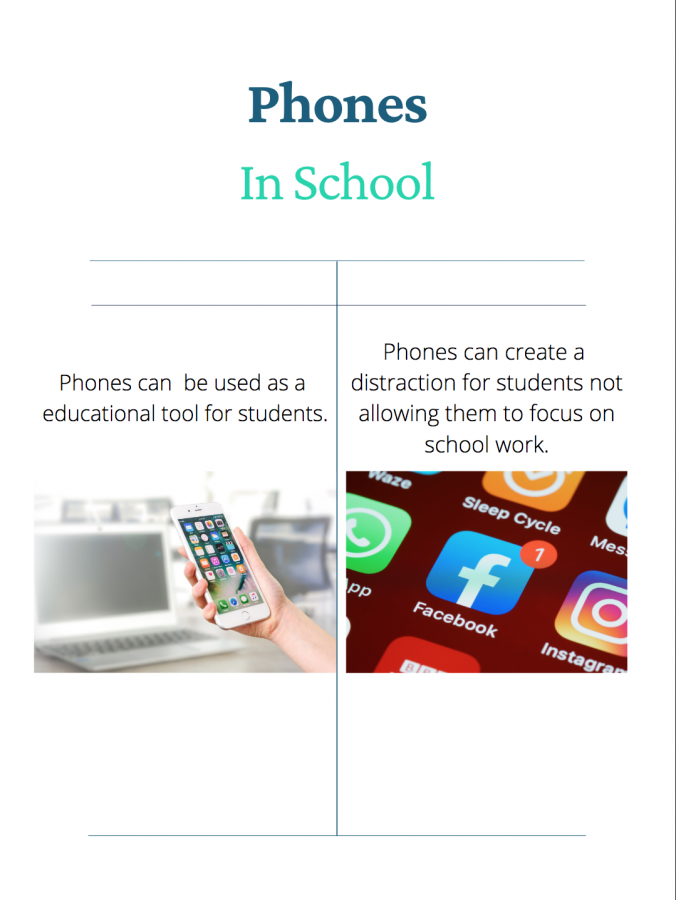 The graphic shows the pro and con of students using phones in school. Regulating how phones are used in school can stop the distraction of phones and make them a useful tool.

Augusta Middle School had a zero-tolerance phone policy over the last three years. At the high school, the teacher decides whether the student can have a phone or not in class. I have not seen phones as a big problem in school.

The issue most people see with phones in school is they are too distracting for students to have and keeps them from focusing during class. As a student, I see phones as a benefit for a multitude of reasons. One of the biggest reasons is having all class assignments available at all times. Since our school uses Google Classroom and PowerSchool, it is very easy for students to then see messages from teachers and new assignments right when they post them. Emailing or messaging a teacher is crucial for students as it allows us to stay on top of their work.

The reason that some see phones as an issue for school is because of what they are used for outside of school. Outside of school students call, text, play games and watch movies on their phones, so people transfer that over to say that is what students will do in school. Being a student, I use my phone during school to check my grades, teachers notifications and to see news going on throughout the day. I feel that if a teacher has problems with phones they can then make it to where their students can only use their phones when they give permission to. Phones are a privilege and if students lose that privilege to a teacher they then lose their right to have their phones.

If a student is using their phone for messaging, playing games, etc, then it becomes a problem. I do not think the solution to the problem of kids using their phones in a non-academic way is to get rid of phones. If the school can regulate students to use their phones in an acceptable way, it will help not only the students, but teachers, and the school as well. With schools using online assignments, grading, and contacting teachers, phones are a justified tool to be used in school. That the high school is lenient on the phone policy by allowing students to keep them on their person. Overall, I see phones as an academic tool for students rather than becoming a distraction from schoolwork.