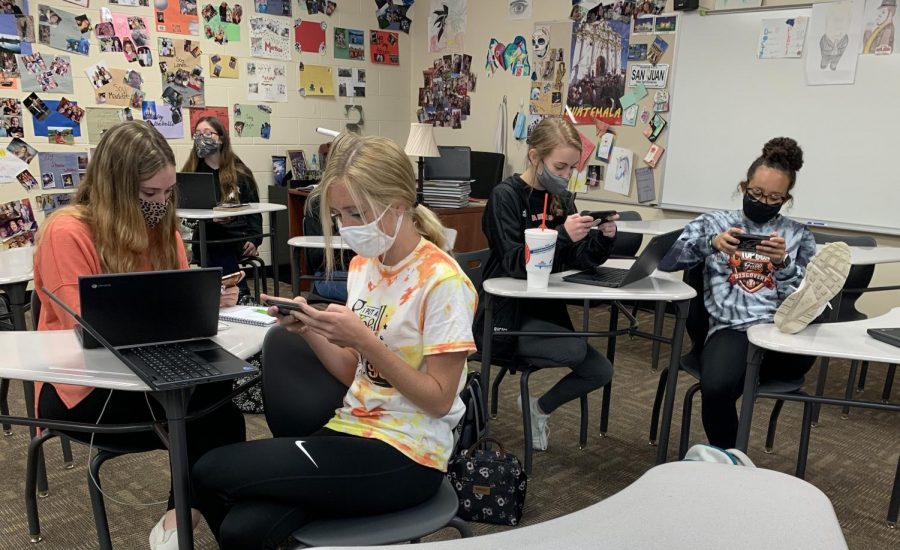 Juniors Lizzie Johnston, Porsha Zweifel, Avery Riedel and Adrian Walker play “Among Us” together after their assignments are done in Spanish teacher Mandy Walker’s class. Adrian was the imposter during the game.

While sitting in your third block Spanish class, you look over to see a group of students playing “Among Us” together. Phrases such as “red is sus,” “I saw blue vent” and “I saw him kill on cams” are heard from across the room.

“Among Us” is an online, multiplayer game that was developed by American game studio InnerSloth.  It was released June 15, 2018, but became popular in September 2020.

“I learned about the game from my brother. He was playing it one day, and I just decided to try it out,” senior Alexis Semisch said.

The game takes place in a space-themed setting where players take on one of two roles. Most players are crewmates, but some take on the role of one to three imposters.

“My favorite part about the game is being the imposter because you get to run around killing [crewmates] and have to convince everyone it is not you,” freshman David Rios said.

Whether the player is a crewmate or an imposter, the game takes planning a strategy and following through with it. Sophomore Grady Fox’s favorite part of the game is the fact that it takes so much thought to win.

“I feel like it is more of a mental exercising game rather than more games now where it is based on just trying to kill crewmates. It is more psychological,” Fox said.

Students have become addicted to the game and enjoy playing at school when nothing is happening in class.

“I usually play at school during my Spanish class,” junior Adrian Walker said.

Another reason students like to play at school is because of the people they can play with. The game allows players to join each other’s games by entering a game code. Students enjoy having someone to play with for more enjoyment.

“The best class to play in is definitely [Mandy] Walker’s because of the people in there because they make it so fun,” Semisch said.

In order to win the game, the crewmates either have to finish their tasks or vote out the imposter. There are many different tasks in the game, that are all fairly easy to complete. After a crewmate is found dead, players take a short amount of time to discuss and vote. In some situations, crewmates can vote someone out for being suspicious, commonly being called “sus” even if they are not the imposter.

“When I am not even the imposter and I get voted out, it makes me pretty depressed actually, because I would be voted out for no reason,” Walker said.

Along with being the imposter, their job is to strategize how they kill crewmates to prevent from being voted out. The imposter has the ability to use vents to move from room to room.

“I kill a crewmate, then vent to another room and go away from that room so no one suspects anything from me,” Rios said.

As many students have grown addicted to the game, it has possibly taken over their lives.

“I probably play around five hours a day between at school and at home,” Semisch said.

On the other hand, some do not play as much as others.

“Honestly, I do not play that much a day, just when I have the free time for it,” Fox said.