Surviving the system: the story of Raven Holland 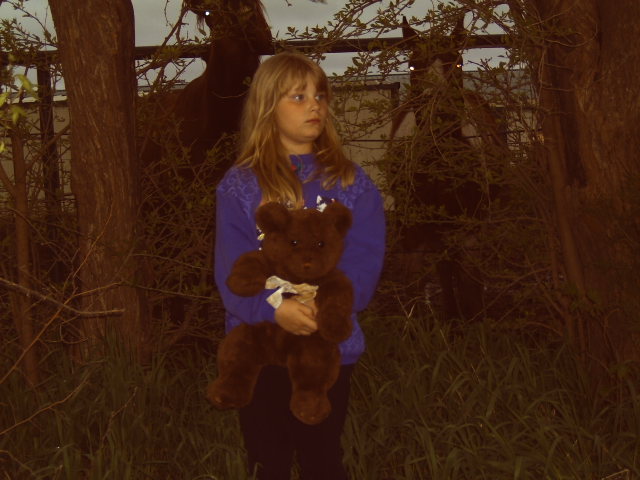 Raven Holland, around age six, holds a stuffed bear. Holland spent eight years in the foster care system before being adopted by her great aunt.

Imagine not knowing whether your siblings were dead or alive, or not knowing when you would be forced to a new house with a new family. This is the case for many children in the foster care system. One of those children was junior Raven Holland.

“I was maybe three or four when we were taken away from my biological mom using drugs and in and out of jail and my grandparents couldn’t provide for us,” Holland said.

In her first home Holland lived with three teenagers, one of which was her brother. Holland recalls the harsh treatment she was given, but she was not in the home for long.

“The worst memory I have there is being forced to eat a decently sized meatball, the size of a fist, and I have acid reflux,” Holland recalled. “I got sick during the night and I didn’t want to get in trouble by going inside the parents room so me, a three or four year old, got some rags and cleaned the mess up myself. The following morning though, I was in trouble and spanked for not telling the parents and ruining the rags.”

After this house, she was separated from her brother for the first time and believed her brother to be dead. Holland was also convinced she would never see her grandmother again, so she kept her baby blanket and a purple stuffed horse that was a gift from her grandmother close to her.

“My second home, I remember, was in eastern Kansas. [I was a husband and wife in a small house],” Holland said. “This couple would have adopted me and kept me the longest, too. I loved them and watched the original Rudolph there on snowy nights.”

Holland believes this house is where she picked up her love for Dora the explorer, but her time at the house was short-lived, and she was moved to a house in Western Kansas.

“It was a large house, and I was reunited with my brother for a short while,” Holland said. “I had the top bunk and always needed help getting down because I was scared of heights.”

Holland remembers being served fruity pebbles every morning for breakfast and a trampoline she was never able to use due to her short time at the house. She was once again separated from her brother after being moved to a new house. Her last house was different; she was moved to her great aunt’s house.

“My first memory when arriving at my aunt’s was their big white husky, Cody,” Holland said. “I knew I was safe when I saw my aunt and uncle coming in for a hug.”

For five years Holland juggled therapy, visitations with her mom and grandparents and being able to be a child again. Holland’s brother joined her shortly after being moved to her Aunt’s house. In 2010 she was adopted by the Hollands and in 2013 her brother graduated from AHS shortly after the passing of her adoptive Dad. Holland is now free to visit her biological family on her own terms, but says she cannot forgive them for abandoning her and stripping her of a proper childhood causing her to mature so quickly.

“I was in foster care for almost eight years total. I was always alone, and from the experience, I’m always anxious, don’t like being alone but hate being around people, and often depressed,” Holland said. “Foster care is definitely traumatizing for children especially if they’re young and can be lied to easily.”

Holland’s two younger siblings are still in the foster care system. Although she still has contact with them and believes they are in a good home she is still worried for them due to her experiences in the system. Her sisters are saving money in case they are not adopted by the time they are 18.

“Once you turn 18, you’re on your own,” Holland said. “You have no family and they don’t help you. It’s a devastating experience, and I hope no one has to go through it.”