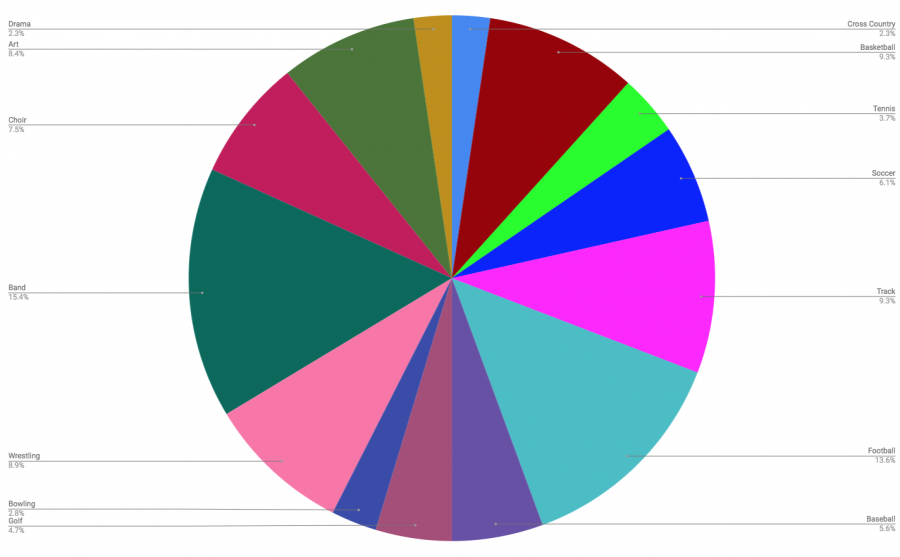 Males have lots of involvement in sports groups this year. An Oriole News poll shows, 66.3 percent of Augusta males are involved in sports while 33.6 percent are involved in a fine art. Members of staff, as well as students have their opinions about why.

“It shows that guys are weak and guys can’t be related to as weak,” choir teacher Jerrod McNutt said. “Girls can be related to as tough and it’s okay, but it’s not okay for guys to be weak or seen as weak. Sports are made to be a bigger deal here and the arts aren’t.”

Fine arts teachers and students all have similar opinions and believe the arts have been downgraded and are now seen as groups for girls.

“A lot of the guys think that the fine arts is more feminine and not as manly as it could be,” Jakob Bergkamp (12) said.

Teachers acknowledge an issue with how children are taught to think from a young age. These methods prevent them from expressing themselves in a way they love, and forces them to do anything possible to keep their image.

“There’s a stigma attached,” drama teacher Tim Laner said. “In our society, it’s seen as unmanly if you’re not involved in a sport or some type of physical activity it’s just society rules and the way Americans bring up their children. From my generation standpoint, a lot of times young men that were involved in drama, theater, or music were kind of labeled.”

Students in sports have also recognized the issue and understand partially why it has started.

“It’s a gender-stereotyping kind of thing,” Abbee Rhodes (12) said. Men have that masculine image and don’t always want to do all those things like fine arts and singing and [etc.].”

The way that sports groups and fine arts groups present students is not the same.

“Boys, whenever they play, are more physical…with sports, you’re very physical as well. They’re not really on the emotional side, and arts really shows off the emotional side,” McNutt said. “Everybody associates the arts with homosexuality and that’s really not a thing…it doesn’t have to be a thing.”

Many guys do not join fine arts for fear of being thought of as homosexual.

Men face the issue of choosing between doing what they love and maintaining what would be considered a good reputation.

“You have to find a balance between both; you have to do what you love, but also do stuff that projects you to the be the best person you can be,” Payton Lewis (9) said.

Fine arts teachers know the struggle of not having all the guys that they need and want.

“You just don’t have a lot of boys really involved in the arts here,” Laner said. “There was a time two, three years ago that we were doing a musical here and we had to have male teachers fill the roles because we didn’t have enough males even audition, and I think that’s really sad.”

Even though having a scarcity of guys in fine arts has become an issue for many, athletic director Travis Olive brought up another point.

Some people believe that awareness needs to be made for different aspects of the issue.

“The guys that do and are interested in fine arts will be in it no matter what,” Rhodes said. “The bigger issue is accepting more guys into it and being more welcoming and not making fun of those who are in it.”